On the Brink of Success 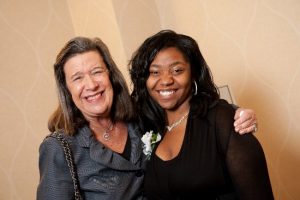 We don’t call Susan Weinberger Dr. Mentor because she has her PhD in mentoring. Rather, she earned that honorary title for her extraordinary work over the past three decades that changed outcomes for thousands of children in Norwalk and beyond, many of which were not engaged in learning nor had anyone in their lives to support and encourage them.

“With just one hour a week, I realized you could make a huge difference in a child’s life,” said Weinberger, founder of Mentor Consulting Group. “It could be going to the park or simply just listening to the child talk about his or her week…it gives the child a sense of hope and happiness.” And this translates into a more successful student.

The idea to start the first school-based mentoring initiative in the United States came to Weinberger when she was teaching Spanish and working in the central office of the Norwalk Public Schools. “It really bothered me that some kids didn’t want to learn,” she explained. ”These students needed someone to believe in them cradle to career. Instead of labeling them ‘at risk,’ they should be called, ‘at the brink of success.’”

Since then, Dr. Mentor has written countless books and articles on mentoring, been recognized locally and nationally and implemented her mentoring model for clients around the globe. Most recently, Weinberger was presented the August F. Serra Community Engagement Award for a Lifetime of Excellence in Community Engagement Work at the United Way of Coastal Fairfield County’s 2016 LIVE UNITED Celebration.

Weinberger also practices what she preaches, serving as a mentor to a young Norwalk woman, Tasha, for 23 years. In fact, they share the same birthday and celebrate together every year. “Mentoring a child not only benefits the child but the mentor as well. I can attest to that.”

Currently, Weinberger is focused on helping children with positive transition from elementary school to middle school, a key indicator in future academic success.

“This is the age where self-esteem seems to plunge. Having someone by your side proves to be helpful and eases the transition,” notes Weinberger. But she doesn’t want the mentoring to stop there. Ideally, mentors would follow their mentees through high school and into college, so that they continue to have social/emotional support even when they are no longer a child, creating a lifelong bond just like Dr. Mentor and her mentee Tasha. Today, Tasha has a mentee of her own.

In the early days, recruiting mentors was not an easy task. Weinberger approached local-area corporations for support, claiming that businesses should be interested in education because healthy schools make healthy communities.

“It took a real mind shift and systems change to get CEOs to lend their employees one hour a week to the program,” explained Weinberger.

But as time went on, they realized that there are great benefits on both sides when the business community partners with the schools. Employees feel good about themselves and the children seem happier and more engaged in learning after seeing their mentor.

“In my world, there is nothing more beautiful than giving back.”