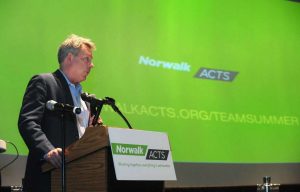 By Kaitlyn Krasselt, The Norwalk Hour

NORWALK — After more than a decade in the making, Norwalk ACTS is seeking independence.

The education advocacy group — which began in 2005, functioned as part of the national StriveTogether Cradle to Career Network since 2011 and under the umbrella of Stepping Stones Museum for Children since 2014 — is seeking official nonprofit status, allowing the organization to independently collect donations, operate under an independent board of directors and create its own infrastructure.

Leaders within the organization announced the coming change to its members via email earlier this month and at a quarterly meeting Tuesday at Stepping Stones.

“We have been in the process of evolving,” said the Rev. Lindsay Curtis, Norwalk ACTS advisory board chairman, who thanked Stepping Stones for stepping up as the anchor organization when Norwalk ACTS had nowhere to go.
“We needed a home, we needed some place to call home, and … Stepping Stones has done that,” Curtis said. “But as we evolve, we realized that we need to be a little bit more independent. It needs to have that perspective, it needs to have that perception, and so as we’ve grown we’ve moved toward becoming a separate 501(c)(3).”

Norwalk ACTS was conceived in 2005 to address suspension rates, aspects of No Child Left Behind and Connecticut’s achievement gap. The organization has since grown it’s membership to well over 600 people involved in every aspect and level of education in Norwalk, adopted a Collective Impact mentality and expanded its goals to include children ranging from pre-K to college.

Though the organization’s foundation is abstract — Norwalk ACTS doesn’t actively do any programming of its own, instead working to connect existing organizations and education partners to solve community-wide education problems — its mission is fairly simple: to improve the lives and futures of all Norwalk youth.
“We live in a really great city and this is a city that can be proud to say we are a collective impact city in support of all of our children,” said Norwalk ACTS Executive Director Anthony Allison. “I don’t care what your title is. What I care about is your commitment to do this work.”

“A new board of directors will be brought on board in early 2018 to coincide with our 501(c)(3) status,” Curtis said. “Moving from the advisory board to the board of directors for Norwalk ACTS will give us infrastructure and added structure … We realize that not only did we want independence, but we needed governance. One of the things that the advisory board has always struggled with is governance. This is in no way an attempt to be autocratic.”
kkrasselt@hearstmediact.com; 203-842-2563; @kaitlynkrasselt