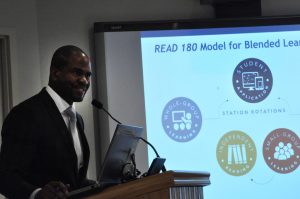 By Nancy on Norwalk

“I have never seen this level of growth at this time of the year … and not across all sites, and not in a new intervention,” said Houghton Mifflin Harcourt Director Academic Planning David Bain to the Board of Education. “I think there is a lot of secret sauce that has happened here, as I have gotten to know your team.”

Bain, who flew in from afar for Norwalk’s meeting, was the second speaker in an extensive review of this year’s middle school redesign result data, which was followed by a look ahead to what comes next.

His comments were not an anomaly.

“We are one of the top areas for growth,” NPS math instructional specialist Craig Creller said. “Many of our students are exceeding national growth marks by two, three, four, five times. Dr. (Norwalk Public Schools Chief Academic Officer Michael) Conner and I will be speaking Thursday at a national math convention. We are the spotlight district because of the extremely high growth we have had in mathematics this year. It is actually quite incredible.”

“I am proud to be working with you guys in Norwalk,” HMH Project Manager Nicole Jackson said, as she began a “quick capture of the intervention model.”

“If I say anymore I am not going to be able to continue,” Jackson said. “It’s just great to see that kids are (not going to need intervention instruction for the rest of their time in school). They are only going to need it for a couple of years, it’s not a life sentence.”

The talk was accompanied by extensive data, with talk of comparative percentiles on results on the implementation of System 44, “the most intensive intervention,” according to Bain, Read 180 and Math 180, with NWEA (Northwest Evaluation Association) MAP (Measure of Academic Progress) results to verify the claims.

“The movement of these struggling students was dramatic,” Bain said, describing it as double for the cohort nationally.

“Even when you look at Nathan Hale Middle School, which gives the appearance of being the lowest achieving … by the middle of the year they have already exceeded their end of year growth,” Bain said, going on to describe the results at Ponus and Roton as “extraordinary.”

“Students were targeted very, very specifically to interventions that targeted their actual skill deficit. That was a big hurdle,” Bain said. “Oftentimes districts, they only target a small population of their kids or they try to spend most of the times doing grade level-like work. But these students are four and five years below grade level. They needed work at their instructional level. They needed work at times targeted sometimes at third and fourth fifth grade levels.”

“We saw that work. We also saw some amazing teaching. We saw some teachers just have a dramatic impact. One of the things we monitor along the way is how on-model schools are. At every one of your sites, you were significantly on model,” Bain said. “… You as a school board it is clear invested heavily in professional training for the teachers and there was an incredible outcome. You even brought on a project manager to support these teachers on a daily basis. So, I think they received incredible support both from within your organization and externally to be successful.”

System 44 is for students who are at a first grade reading level, although they are in middle school, he said.

“These are students who typically become drop outs, become disenfranchised with our educational setting because they cannot pass tests, they cannot read, and our teachers typically don’t have the support system,” Bain said. “… I see intervention students in all three programs on pace to meet double the normative growth, in both literacy and math, at every grade and at every school. That is really an unheard-of outcome for our work and I applaud you and your team for being able to reach this outcome.”

Nathan Hale Middle School Principal Albert Sackey also spoke, briefly explaining the Teach to One math program, which he selected last year as the major feature of the school’s redesign.

It’s personalized math instruction for every child, he said.

Superintendent of Schools Steven Adamowski encouraged BoE members to go see a Teach to One class in action.

“I think you’ll be extremely impressed. I think you’ll also see students are learning to become independent learners, the confidence level of students in a subject that is not the natural inclination of many of us. It is incredible,” Adamowski said, crediting the Dalio Foundation for funding the effort.

Teach to One will not move to other schools just yet, as administrators would like to get all grade levels at Nathan Hale onto the program first, Adamowski said.

Creller described block scheduling as a success, to the point that administrators would like to speed up its implementation from a three year phase in to a two year transition.

In a slightly negative note, Adamowski said that Norwalk’s high achieving middle schoolers have not grown at the rate as those who require interventions.

“You have to begin somewhere, you begin with the students most in need,” Adamowski said.

Yordon said the changes are exciting and energizing, but there are many new things to learn and professional development is needed.

Giandurco called middle school redesign a unique process and said there have been positive effects, but asked for a “careful, more slower implementation.”

Teachers are gaining experience with NWEA testing but there are gaps and potential problems, he said.

“Where is the PD (professional development)?” he asked.

“I have been teaching science for almost a year now with no science PD whatsoever. None,” Giandurco said. “. … I am managing but I could do much better with some instruction.”