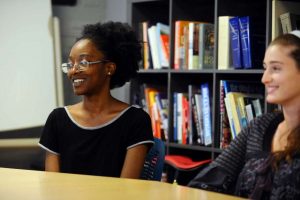 STAMFORD — The city has placed more high school students than ever in paid summer internships aimed at providing actual job experience for the sixth year of the Mayor’s Youth Employment Program.

Mayor David Martin on Thursday praised his predecessor, Michael Pavia, for creating the program, which since 2011 has expanded to employ 91 city students in high-demand fields that organizers hope they’ll return to after college.
“This is an investment in youth that actually pays off for those running the internship,” Martin told a group gathered at the government center. “We have things we’ve done in the city of Stamford that we couldn’t have done without the contributions of interns.”

“I’ve really been inspired by the diversity we’ve had in the projects. It’s opened my mind to be more broad in education,” said 17-year-old Viraj Attre, an Academy of Information Technology and Engineering graduate attending Dartmouth College in the fall.

Attre worked last summer with the Board of Education. Now he spends 28 hours a week creating a policy for driverless cars.

The interns are also a boon to the agencies that employ them. Madden’s department spends $1,700 per student, paying them $10 an hour — 40 cents above the state’s minimum wage.

Madden said to hire non-interns to do the same work would cost the city around $300,000. His department — which consists of only himself during the school year — spends $17,000 to participate in the mayor’s program.
“It’s probably one of the most valuable programs we offer in the city,” Madden said. “It gives that first step into a lot of companies that you may never get.”

Juanita James, CEO of the Fairfield County Community Foundation, said without opportunities for paid summer work a significant number of students would be unemployed and at a statistical disadvantage for completing college.
“Many of us can attest to the fact that first-time jobs provide connections, skills and experience,” James said.
She said digital media, information technology, finance, construction and fitness are some of the fields here doing the most hiring.

Student salaries are funded by the city, which kicked in $25,000 for its interns, as well as donors. Fairfield County Community Foundation contributed $30,000. Bank of America and Starwood, the hotel company headquartered in Stamford, each donated $20,000.

Organizers said many students come back after their first year, even when they’re in college. Tim Bott, 18, returned to the economic development department this summer as an intern, but not with the youth employment program. The incoming sophomore at New Jersey Institute of Technology now earns $15 an hour as a college intern, and credits his earlier experience with helping him decide to study urban planning rather than civil engineering.

“If you want to get change done in the city, I know how to go forward and do it,” Bott said.